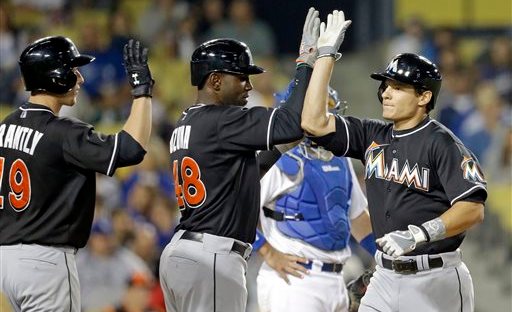 51 games into the season, it’s hard to say that the Marlins are under preforming even though they sit at 13-38.  All hopes of this being a cinderella story are virtually shot, so it’s time to make some moves.  The Marlins have only scored 138 runs thus far, last in the majors.  The pitching rotation has been solid, and the bullpen good enough.  This is somewhat unexpected because the fish have been missing Henderson Alvarez and Nate Eovaldi due to injury, and Jacob Turner is still in AAA.  The Marlins’ struggles are a direct representation of their offense, and this is what needs to be addressed.

In part 1 of this series I was 100% against the idea of even imagining a Marlins team without Giancarlo Stanton, but recent events have led me to believe that he needs to be made available.  Why the sudden change?  Here’s why I would start shopping Stanton around to other clubs:

Dealing Stanton will obviously create another media uproar against the Marlins’ management, but I’ll be the first one defending them as long as they get proper value in return for Giancarlo.  Stanton will create major highlights and produce for another team, but it is in the Marlins best interest as an organization to cash in for his talents now.  Start making noise now, and generate a huge return package at the trade deadline.

Pitching has been one of the pleasant surprises for the Marlins this year.  Young pitchers Henderson Alvarez and Nate Eovaldi will be back from their injuries shortly, and can fill in for Ricky Nolasco and Kevin Slowey.  They will definitely be in high-demand at the deadline when teams need to shore up their rotation with solid veterans.  The Marlins also don’t need to be dealing with Nolasco’s contract ($11.5MM in 2013), and will be a free-agent at the end of the year.  Mike Dunn and Ryan Webb fill the need for teams needing bullpen help, and the Marlins need to continue building for the future.  However, only Nolasco needs to be aggressively shopped.  the Marlins have Slowey, Dunn, and Webb under team control through 2014, 2017, and 2016 respectively.  They should only be traded if the right deal arises, but many teams will be asking for their services.

There is no doubt that some contender will need help in the OF for the second half of the season at the trade deadline.  Justin Ruggiano was finally given his chance to play everyday for the Marlins last year, and shined ( .313 / .374 / .535 ).  He hasn’t been near that productivity so far in 2013 ( .217 / .293 / .410 ), but I’d hope that teams look at the veteran outfielder did last year in 91 games.  He would likely have to be packaged with one the pitchers above to bring in.  As also mentioned earlier, the Marlins have plenty of outfield replacements available.

The Marlins have future openings at 1B, 3B, and always need pitching.  1B should be the more immediate need, since the Marlins acquired 3B Zack Cox from the Cardinals at the deadline last year, but he hasn’t gotten a shot in the bigs yet.  Logan Morrison hasn’t been healthy enough to fill the hole at 1B.

Ranked as MLB.com’s #2 1B prospect, and the Cardinals #6 prospect, Matt Adams is a power hitting 1B that’s big league ready.  The Cardinals have a deep farm system to tap into.  Stanton can certainly bring in Adams + Shelby Miller (5-3, 2.02 ERA, 0.979 WHIP) + Carlos Martinez (#2 Cardinals, #30 MLB, #9 RHP).  The Cardinals might not want to give up their top 2 pitching prospects in Miller and Martinez, but it’s definitely where I would start discussions.  The only potential problem is that the Cardinals top prospect Oscar Taveras plays the same position as Stanton, but I’d be willing to move Taveras to LF if I was able to land Stanton.  The Marlins might be able to land only Adams if they dangle Nolasco, but I’d definitely inquire with the Cardinals’ management.

I may be a little biased since I just watched Pelotero, but Miguel Sano is one of the best players to come out of the Dominican in the past few years.  He is the Twins top prospect, #11 in the MLB, and the top 3B.  Sano just turned 20, and has proven himself as a hitter in the minors.  Sano is a type of player that you can build your organization around, but will only be attainable if the Marlins are willing to part with Stanton.  I’d ask for Alex Meyer (#2 Twins, #38 MLB) or Kyle Gibson (#3 Twins, #45 MLB) in the deal with Sano, and maybe a lower level pitching or 1B prospect.  The buzz around Sano is similar to what was around Stanton as he was making his way through the majors, so it’s hard to ask for more than him.

I mentioned earlier how I think the Marlins could put together a deal to get any prospect except Jurickson Profar with Stanton.  Profar first burst on the scene with his Little League World Series team from Curacao, and has seen limited Major League action so far.  He is the #1 overall prospect in the majors right now, and it’s hard to imagine the Rangers parting ways with him.  Nonetheless, you have to try if you’re shopping a player like Stanton.  The trade would have to be Stanton for Profar straight up, or with the Marlins giving more.

The other Texas Ranger, Mike Olt is a major league ready 3B that has already has his name thrown around a ton in trade talks.  if the Marlins go after Olt, they can bring in a few pitching prospects as well.  The Rangers don’t have a top pitching prospect, so maybe another team can get involved, unless the Marlins feel strongly about a few of them.  Cody Buckel (#4 Rangers, #80 MLB) has been solid in previous years, but is struggling so far in AA.  Reliever Wilmer Font (#7 Rangers) has had a solid 2013 so far.  The Rangers also have my former travel ball teammate OF Lewis Brinson in their system.

When it comes down to it, this is what I’m looking for.  The Marlins are solid enough at C, SS, 2B, and OF with Rob Brantly, Adeiny Hechavarria, Derek Dietrich, Marisnick, Yelich, and Ozuna.  1B belongs to Logan Morrison when he comes back, but he hasn’t been consistent or healthy enough for me to feel comfortable with him.  Zack Cox is expected to be the Marlins’ future at 3B, but this is also a position that can be upgraded.  Or, take Kris Bryant or Colin Moran if they fall to #6 in the draft.  The Marlins might just have to take the best package offered to them regardless of position, and then make subsequent moves from there.  As it gets closer to the deadline, the market for players like Nolasco and Slowey should narrow down.  If I was in charge I would be making major moves, but I’ll have to sit and watch to see what my favorite team does.

View all posts by Michael Silberling